February 07, 2019
As today is Time to Talk Day I thought it apt to share my mental health story.

I suffer from depression and anxiety which is thought to be a chemical imbalance rather than justified depression.
Meaning I often feel depressed when there's nothing to be depressed about and I am then unable to answer "what's up?", in fact I deal with things much better when I have a justification.

I self-harmed, sometimes a lot. It wasn't 'attention seeking', it wasn't because I thought I was bad or that I needed punishing, it was just a release which helped when nothing else was.

As I got older and became more in charge of my medical care I spoke to different GPs, some who dismissed me and some who medicated me with 2 different antidepressants neither of which worked.

Eventually as I reached my 20s the Drs finally took me seriously and believed there was something more real wrong than teen problems. This is so wrong and hopefully no longer the case.

I tried everything I was offered; computer based CBT (which I HATED), counselling (apparently I just need more money and more sleep), about 5 different medications and more recently a stress course and 1 on 1 stress counselling.

The stress course was great for any justified anxiety and I would highly recommend it, the other treatments just weren't for me.
Medication works for me, so far I've had 3 which don't and 2 which do. I had to change in the last year from one which used to work but stopped working, I'm now on a different medication.
I'm not naming these medications on purpose as different things work for different people and I don't want to sway anyone's feelings in any way.

Now I have a fantastic GP who really gets me, she can tell how I'm getting on just by having a chat.
I'm able to be more open about my depression although I do normally downplay it quite severely.
I recognise my symptoms much more easily now which is powerful because it gives me chance to reach out to friends, family or medical professionals early.
I trust myself now, I have a house full of medications and sharp objects and I know I am strong enough to manage my feelings.

Don't get me wrong urges and temptations still exist I'm just in a stronger place. Years of living with depression have trained me. This doesn't mean I'll always be strong enough but hopefully now I can see the downhill slopes coming I can take any steps.


Mental health isn't a fad, it isn't teen angst, it isn't a phase, it isn't because I'm "sad". It's an illness, no less than a massive infection. just because you can't see the symptoms doesn't mean they're not very real. You can't see internal bleeding but you wouldn't tell someone to get over it.

I won't get better, this is part of who I am and I accept that.

How can you help someone with depression?
Be there for them
Don't make them talk about it, don't try and cheer them up, just be there. Don't stop inviting them no matter how many times they decline, send them a text to check in, pop round for a cuppa and I cannot express this enough
ASK THEM WHAT WOULD HELP
We may not know every time but sometimes we do.

For me it's laughing with a friend in front of TV, a silly chat with a friend, pancakes at Wetherspoons, a quiet night in or sometimes it's letting me have time to be depressed; sometimes I need to feel it to get over it. 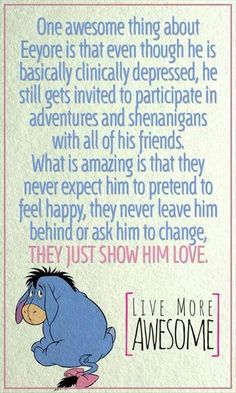 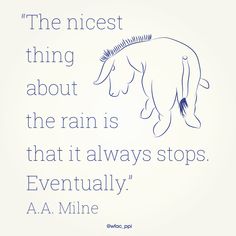 Be like the 100 acre wood were for Eeyore and that will be everything to a lot of people.

A very important footnote: you can't help everyone, not everyone will let you know they need help. If someone chooses to end their battle and their life do not look at what you should have done better, how you could have helped more. It is not your fault! It is not anyone's fault! No one had failed. Someone just couldn't fight any more.

Popular posts from this blog

Failed Blood Donation - caution, not for the faint hearted

November 01, 2017
I had my first failed blood donation today. I passed all the questions and tests, got in the chair, remembered my name, it was going fine. Then the guy does his sharp scratch bit. Followed by some firm poking, wiggling and a bit of pain, few more wiggles and he says "we'll have to stop there, I've missed the vein". I think we're done but then he calls for the nurse, "we've got a bruise" Over comes the nurse with a special leaflet and explains I'll probably get a bruise and all the things not to worry about. She was very apologetic which really wasn't necessary, these things happen. She gave me the stark warnings of worse case scenario (not overly bad tbh) and apologised some more. I fully kept my sense of humour and laughed about it. It was my 15th donation and these things happen, as far as I've concerned even a huge bruise is nothing compared to someone needing blood and it not being available. On my way out I made an appointment
Read more

November 30, 2017
When I tell people I work 2 jobs or that I work 7 days they often say the same phrase after I've explained I run a craft business, that phrase is "but it's not like real work", Sometimes they follow it up with things like "because you're at home", "because you enjoy it" "because you work for yourself" etc etc and they're right! It's not like real work I don't get a day off, hell I barely even get an evening off I don't get to go home from work I work late into the evening when I have to (I just finished and it's past 10pm) I am ALWAYS thinking about work I'm not paid a wage, if people don't buy I don't get paid If people aren't happy with the product it costs me money I have no company There's no HR department There's no sick pay, holiday pay, time off There's next to no company benfits There's no salary or hourly wage There's no escaping the boss The list goe
Read more

November 01, 2017
Now that October is over I can declare I didn't have any alcohol. I'm a pint of lager kind of girl rather than spirits most of the time and I don't go out very often so I wasn't drinking insane and unsafe amounts, I very rarely get more than a little tipsy. But throughout August and September I was having a couple of cans of lager every evening, it was basically "Roo's in bed, grab a drink and relax at last. Normally a crate of beer would last me month but instead it was lasting a week, it had become part of my routine and an essential part of winding down. Then we went on holiday and the fridge was kept well stocked, I ended up having a lot more to drink. I still wasn't getting drunk but I was drinking a lot more than is recommended albeit slowly throughout the day. So when I got home I decided my body needed a break! It was the 1st October and there were things on TV and social media suggesting Go Sober for October so I decided I'd do it. I also de
Read more

MummyandRoo
I am a Mum of 1 and step-mum of another, Wife, Business Owner and semi-adult. This blog is just a mix of my thoughts, reviews, and more thoughts.